Trevor Bach writes, “On Memorial Day Weekend in 1921, as Jim Crow segregation laws seized the country, rumors about a young Black man sexually assaulting a white woman in an elevator sparked a frenzy in Tulsa, Oklahoma. As the racial tension escalated, a white mob descended on the city’s Greenwood neighborhood, a highly prosperous area known as “Black Wall Street,” and committed among the United States’ most egregious acts of racial terror, looting businesses and burning entire city blocks. Later estimates would cite as many as 300 Black Tulsans killed from the violence – some likely from firebombs dropped by private airplanes – and as many as 10,000 left homeless. Greenwood lay in ashes.

Nearly 100 years later, a series of projects aims to both commemorate a long under-recognized massacre and help revitalize the iconic American neighborhood. Read the full article.

While this horrific story of racism is part of our past and difficult to confront, this is the time for us to know the story, embrace the pain and grief, support the Greenwood Rising projects with our dollars and prayers, and turn our hearts, our minds, and our hands to become unrelenting catalysts for anti-racism.

Pine Street Christian Church (Disciples of Christ) in Tulsa is one of the churches that will be acknowledged and recognized, for being in the historical Greenwood area for over 100 years. Pine Street Christian Church (est. 1907) has congregants who are descendants of the massacre. A special event “Faith Still Standing” to commemorate the Greenwood congregations will take place May 30, 2021. You may find event details as they become available on the Commission’s events schedule.

An ordained Disciples of Christ minister Rev. Zenobia Mayo of Tulsa is one of the descendants. Her great uncle was Dr. A.C. Jackson who was an African American surgeon who was killed during the Tulsa Race Massacre in 1921. According to the Greenwood Cultural Center, Jackson was considered as the “most able Negro surgeon in America” by the Mayo Brothers, founders of the Mayo Clinic.

There are other Disciples descendants as well. The Region will be releasing a podcast soon of a couple with those voices. 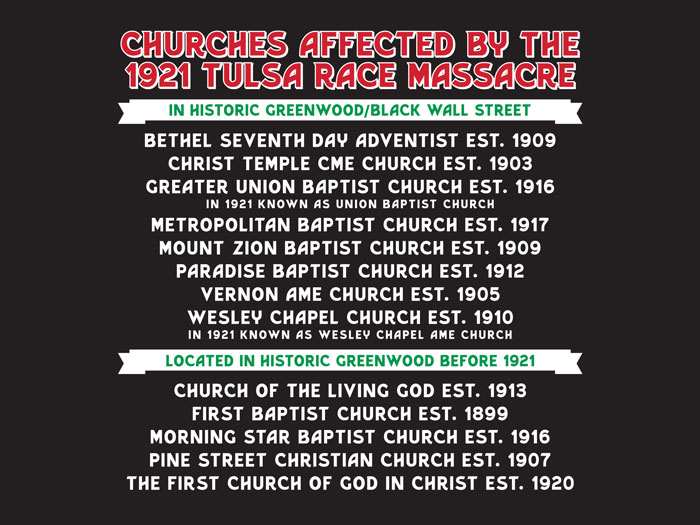 The primary dates of the 1921 Tulsa Race Massacre Centennial Commemoration are May 26 – June 6, 2021, see the Event Schedule.