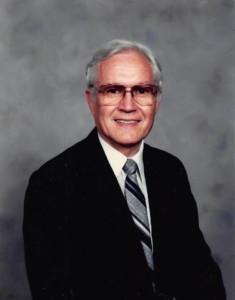 Eugene Norman (Gene) Frazier was born on October 24, 1928 in Ursa, Illinois, the son of J. Norman and Esther Frazier.  He dedicated his life to ministry as a teenager and preached his first sermon at the age of seventeen.  While attending college in Eureka, Illinois and Phillips University and Seminary in Enid, Oklahoma, he served student congregations in Reese, Kansas; Lorraine, Illinois; Taloga and Jet, Oklahoma.  He held B.A., B.D., and D.D. Degrees; and was ordained Into Christian ministry in 1949.  After seminary graduation, he served First Christian Church in Chillicothe, MO, followed by a staff position for the Christian Churches in Missouri.  His ministries consisted of strong emphasis on evangelism, reconciliation and outreach.  As a promoter of stewardship, he and Bonnie went far beyond tithing in their own giving.

In 1959, he became pastor of Park Place Christian Church, Hutchinson, Kansas.  During his 7 ½ years there, the sanctuary and education expansion were built; the congregation doubled in membership; and outreach giving more than tripled.  While in Hutchinson, he was awarded a trip to the Holy Land in recognition of his leadership in the church and community.  He then served for 11 ½ years as senior minister at Countryside Christian Church, Mission, Kansas.  Dr. Frazier gave strong leadership to lay leadership development and stewardship, while the church’s budget reached 49% to outreach and the building debt was retired.  His record of service throughout his ministry is extensive in all manifestations of the Christian Church (Disciples of Christ), including numerous offices, boards, committees and interdenominational bodies.  In local pastorates he was additionally involved in Scouts, YMCA, mental health, hospitals and many areas of community service.

Dr. Frazier was installed as Executive Regional Minister for the 200 Christian Churches (Disciples of Christ) in Oklahoma in 1977, a distinguished position he held for sixteen years until his retirement to Foxwood Springs Living Center, Raymore, Missouri, where he served as chaplain from 1993 to 1998.  He was an active member of Raymore Christian Church and the Foxwood Springs community, volunteering in many capacities.

Preceding Eugene in death were his parents, a brother Richard Lee, and sisters, Ola Mae and Wanda June.

The body has been donated for medical research. The cremains will be laid to rest at a later time in New Providence Cemetery, Ursa, Illinois.

Cards of care and concern may be sent to Bonnie at her home.