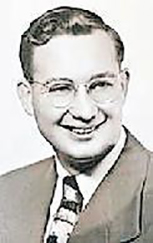 Rev. Dr. Robert (Bob) M. Elliott died on Wednesday, June 10, 2020. He was 96 years young! Bob was born March 31, 1924, in Independence, KS to Paul and Minnie Elliott. He graduated from Phillips University with a BA degree in 1946, received his Bachelor of Divinity from Phillips Seminary in 1952, and was granted an Honorary Doctorate by Phillips University in 1972.

He was ordained to the ministry at First Christian Church, Independence KS, in 1946. He served as Associate Regional Minister of the Christian Church (Disciples of Christ) in Oklahoma for 33 years after serving churches in Indianapolis, IN, Okmulgee, OK and Enid ,OK.

After retirement, he served as President of The Interfaith Alliance and as Secretary of the United Nations Association, both in Oklahoma City. He established the Oklahoma Institute for Biblical Literacy Foundation in 2009, serving as its President in 2013. 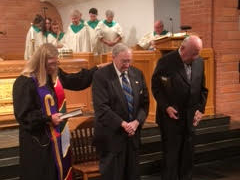 Service arrangements are pending. In lieu of flowers, memorials may be directed to Doctors without Borders/Médecins Sans Frontières (MSF) at this link or to the charity of the donor’s choice.

(In September 2015 he was honored as Elder Emeritus at Crown Heights Christian Church, Oklahoma City.)